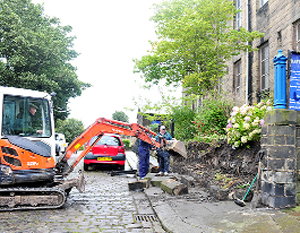 Motorists across the county were left queuing for hours due to flooding on roads while train passengers were also affected.

There was also flooding on a number of major roads, including the M6 north, the A56 at the Edenfield bypass, and the Grane Road.

And in Abbey Village, on the A675 Bolton Road, near the Hare and Hounds pub, drivers were forced to turn around as the flooding became too deep to cross.

Flooding in Penrith caused long delays on trains running through Lancaster and Preston.

A power line was blown down in Clitheroe cutting off electricity to 1,800 properties, fell into a field in Edisford, near to the River Ribble.

Electricity North West sent engineers to the scene after the incident at 6.50am.

The power cable snapped as the pole came down. Some homes were without power throughout the day, but a spokesman for Electricity North West said engineers were working on repairs.

He said: “Engineers at the site aim to fix the problem by the end of the day. We apologise for any inconvenience.”

In Colne, heavy rain washed away part of a stone perimeter wall at Trinity Baptist Church, in Robert Street.

Linda Caddey, church secretary, said: “Half of the wall just collapsed overnight and landed on a nearby parked car.

“It has been raining all night and I think it must have just washed away the foundations.

“Council inspectors visited the site and said there was no imminent danger of the rest of the structure collapsing.”

Meanwhile, all games on Blackburn with Darwen Council pitches have been cancelled until the weekend.

A council spokesperson said: “Due to recent wet weather, and a lot of standing water, workers cannot go on the land to mow.”

The move is designed to protect the pitches.

Forecasters predict that bad weather, including strong winds and heavy rain, would continue to batter the county over the next few days.

Send us your weather pictures and videos