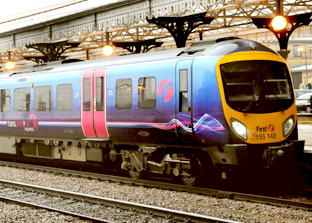 A STRIKE is set to disrupt passengers’ journeys across the North West next week.

Members of both ASLEF and the RMT have rejected a 2.2 per cent pay offer by First TransPennine Express and voted to take industrial action on Wednesday and Friday.

In the North West, FTPE operates train services from Manchester to Edinburgh, Blackpool, Windermere and Barrow-in-Furness, hitting services at main stations such as Chorley, Preston, Lancaster and Oxenholme.

However, services run by Northern Rail will be unaffected.

A company spokesman said the unions had indicated they would be advising train drivers, conductors and station staff not to report for work on both days.

He said company was ‘very disappointed’ by the decision, and it was advising customers planning to travel with FTPE on those days that their journeys might be affected.

”FTPE is planning to operate as many services as possible and provide the majority of station facilities at its 30 managed stations across the north of England,” he said.

“But passengers are being encouraged to check their travel arrangements before setting out.”

Managing director Vernon Barker, said: “We are disappointed that our colleagues represented by ASLEF and the RMT have voted in favour of industrial action and we remain hopeful that a solution can be found and it can be avoided.

“We would urge the trade unions to join us in further discussions.”

The RMT said the company had refused to budge from a 2.2 per cent pay offer that would amount to a substantial pay cut, and urged it to think again if it wanted to avoid a strike.

General secretary Bob Crow said members had made it quite clear that they expected a company which made substantial profits out of their efforts to offer more than a real-terms pay cut.

“The company knows that RMT is ready to negotiate, and if it wants to avoid industrial action it should get back around the table with us and talk seriously about rewarding properly the people who make their profits for them.”

ASLEF said its 300 members who drove trains for FTPE had voted overwhelmingly for strike action.

“Over 91 per cent voted to back strike action which will disrupt the service on 24 and 26 August,” it said.