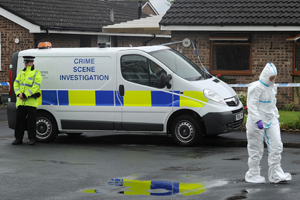 Two women whose bodies were found in a Lancashire house fire today are believed to have been stabbed to death.

A post-mortem examination showed Geraldine Allen, 56, died from multiple stab wounds while results are awaited on her mother, Maureen, 81, but they are expected to confirm a similar cause of death.

A 21-year-old male relative who was arrested at the scene in Fulwood, Preston, continues to be questioned by detectives on suspicion of murder.

He is the grandson of Maureen Allen and nephew of Geraldine Allen and was understood to be living with them.

Both victims were discovered by police in their semi-detached bungalow which was set alight.

The alarm was raised just before 2am by another relative of the two women who was concerned about a number of phone calls they had received.

A spokeswoman for Lancashire Constabulary said: “A post-mortem examination carried out today on the 56-year-old victim has given her cause of death to be multiple stab wounds.

“A post-mortem examination is expected to be carried out on the second victim tomorrow.

“A 21-year-old man from Preston who was arrested on suspicion of murder at the scene remains in police custody where he continues to be questioned by officers.”

Maureen Allen’s son Tony and two female family members left flowers outside the bungalow, in a small cul-de-sac of eight bungalows in Longfield.