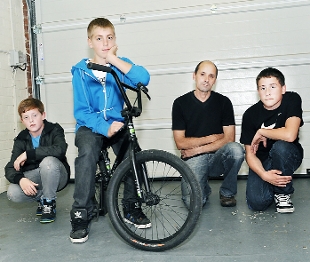 A STEPDAD turned detective after criticising the police response to a mugging.

Ian Johnson, 50, went on the beat when his stepson Sam Watkins, 13, and his friends were thrown off their BMX bikes at a Longridge skate park last Tuesday around 6pm.

The three bikes were stolen after threats were made.

Mr Johnson, of Hornby Street, Longridge, said a group of youths from the Preston area, aged between 16 and 19, had been in the area.

As a result of his inquiries in the village, and on Facebook, he identified one of the teenagers, drove to Preston and got one of the £400 bikes back.

He said: “The officer I spoke to on Tuesday said he wouldn’t be taking statements from the children until Saturday.

“That is too long to wait for children who have been intimidated.

“So I started looking for the bikes myself. I spotted one of the bikes which belonged to Jamie’s friend, gave chase and got it back.

“We are continually told there are people in the cells at Blackburn that need dealing with first.

“If nothing is done and nobody stands up to these people, they will move on to more serious crime.

“They know that if this is how slowly the police respond, then they can get away with it.

“I’m not chasing drug barons. This is teenage kids. It just feels like I’ve had to do all the police work.”

Sam’s stolen bike is a ‘We Are The People Versus’ black BMX, with green trim and green aluminium wheels.

A police spokesman said: “We are investigating a number of lines of inquiry already, including CCTV.

“The investigation continues and Mr Johnson is being kept fully updated.”