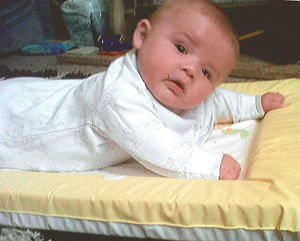 A Preston father is thought to have killed his six-month-old son before hanging himself yesterday.

Taxi driver Paul McBride, 39, was found dead at his mother’s house in the city following a search.

His son Ollie was found in a “very poorly” condition” and taken to hospital where he was later pronounced dead on arrival.

Lancashire Police has launched a murder investigation but is not looking for anybody else in connection with the incident.

The baby’s mother Michaela Swain, who was not married to Mr McBride, is today being supported by trained police officers.

In a statement released through Lancashire Constabulary, Michaela said: “No words I could ever write could express how much I love my beautiful baby boy Ollie.

Detectives are awaiting post-mortem results on the youngster who had “no obvious signs of injury”.

Detective Superintendent Neil Essen, who is leading the investigation, said it was an “incredibly tragic” case.

“It is being treated as a murder inquiry, although we are not looking for anybody else in connection with this incident, he said.

“We are still in the very early stages of this investigation, but we are conducting a number of inquiries in order to establish the exact circumstances surrounding the deaths.”