Brother fights brother as war erupts in Lancashire. Preston was often the centre of battles due to its strategic position on the North-South road to Scotland. Furthermore, early on during the Civil War, Hoghton Tower was destroyed by an explosion, and many Royalists were killed. More on this in part two. 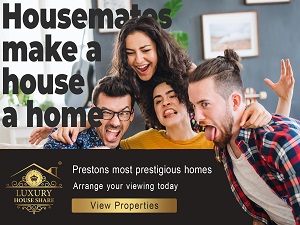 Causes of the war

The English Civil War has been called a war of religion or simply a power struggle between King and Parliament. Admittedly the causes were complex with local and national grievances playing a part. However, the civil war could also be thought of as a war to end feudalism in England, Scotland and Wales.

Feudalism is a system where the King grants land to a Vassal in exchange for military service. The King or lord is all powerful and the nobility have no say in national affairs, except through Parliament. However Parliament can be called or dismissed at the whim of the King.

After the war, factions in Parliament formed parties that interacted without killing each other!

Additionally, Parliament could not be dissolved. The King had less power and became a figure head, as now.

In 1640 Parliament had to be called to grant Money to the King who was trying to fund expensive wars and suppress rebellions in Ireland and Scotland. The only other way the King could raise money was to levy unpopular taxes on the population. This was one of the catalysts for the conflict.

The Civil War in England had many causes including religious fanaticism and the desire of land and business owners to control their own affairs. Local grievances also played a part in which side individuals gave allegiance to.

The Civil War in Lancashire

Most towns in the 17th century were tiny by modern standards, with Preston being centred on the market and part of Fishergate. Even Manchester consisted of only a few streets close to the River Irwell.

The Civil War in Lancashire began to polarise early in 1642. Both sides in the conflict appointed Lord Lieutenants of Lancashire! Lord Warton for Parliament and Lord Strange for the King. At this point both sides wanted to avoid war. In June, a Royalist meeting was called on Fulwood Moor, near Preston. Parliament supporters also turned up and a heated argument broke out, as both sides tried to read different declarations. The final straw was when the Royalists seized Preston Magazine, where arms and munitions were stored.

The match had been lit and Manchester was the next to declare for Parliament. Manchester was then garrisoned by a force of 1,000 parliamentarians, next the Royalist forces attempted to lay siege. The war raged for months and then the first battle of Preston took place.

The first battle for Preston

Catholic areas of Lancashire tended to be for the King. The leading families of Preston, such as the Hoghtons and the Farringtons, were Royalists while the town’s MPs were for Parliament. Generally, most of the population stayed neutral or changed sides, depending on how the wind was blowing!

For a short time in 1643 Preston was captured by Parliamentarians before being retaken by Royalists a few weeks later.

By July 1642 Preston was being fortified by the Royalists. Although walls were not constructed, ‘engines maide of tymber was placed in the streets ….. to keep horses out’.

Several alarms ensued as reports of a Parliamentarian army threw the town into a panic.

Both sides attempted to capture and control strategic towns on the road network. Consequently Blackburn was reinforced and became an armed camp for Parliament. In the early months of 1643 another force from Manchester arrived and it was considered that Preston should be taken.

In February 1643, Parliamentarian forces crossed the Ribble bridge and gathered to the South of the town. The inhabitants of Preston had been ordered to bear arms for the defence of the town by the Council and leading Royalists.

Two Parliamentary forces entered the town from the South and East. Barriers had been placed to block the streets, but by breaking through a house, 20 parliamentarians were able to breach the defences. They went on a rampage breaking windows. Gilbert Hoghton had fled but his brother had been killed and Lady Hoghton captured. Many prisoners were taken. Shortly after, Lancaster fell to Parliament.

Next, Hoghton Tower was to be taken…

On the eve of a year since lockdown 1 began, Preston’s coronavirus infection rate drops below 100