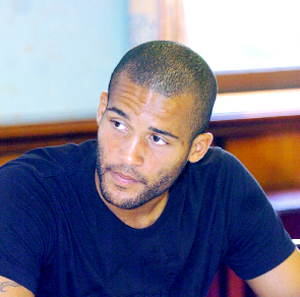 FOOTBALLER Clarke Carlisle has been charged with drink driving.

The Burnley defender, who is on a season-long loan at Preston North End, was stopped driving his £40,000 Audi Q7 in Prestwich, Greater Manchester.

The 31-year-old, of Ripponden, West Yorkshire, was questioned at Bury Police Station and charged with driving with excess alcohol.

He has denied the charge and will stand trial in October.

Mr Carlisle is chairman of the Professional Footballers’ Association and has made TV appearances on Question Time and Countdown.

He is also an ambassador for Kick It Out, football’s equality and inclusion campaign.

He played 131 times for the Clarets before joining Preston in the summer on loan.

He made his professional debut for Blackpool in 1997, before moving to Queen’s Park Rangers in 2000.

He went on to join Leeds in 2004, spending just one season there before moving to Watford.

A spokesman for Greater Manchester Police said: “A 31-year-old man has been charged with driving with excess alcohol. Clarke Carlisle, of Ripponden, West Yorkshire, was charged with drink driving.

He was named Britain’s Brainiest Footballer on an ITV quiz show in 2002.