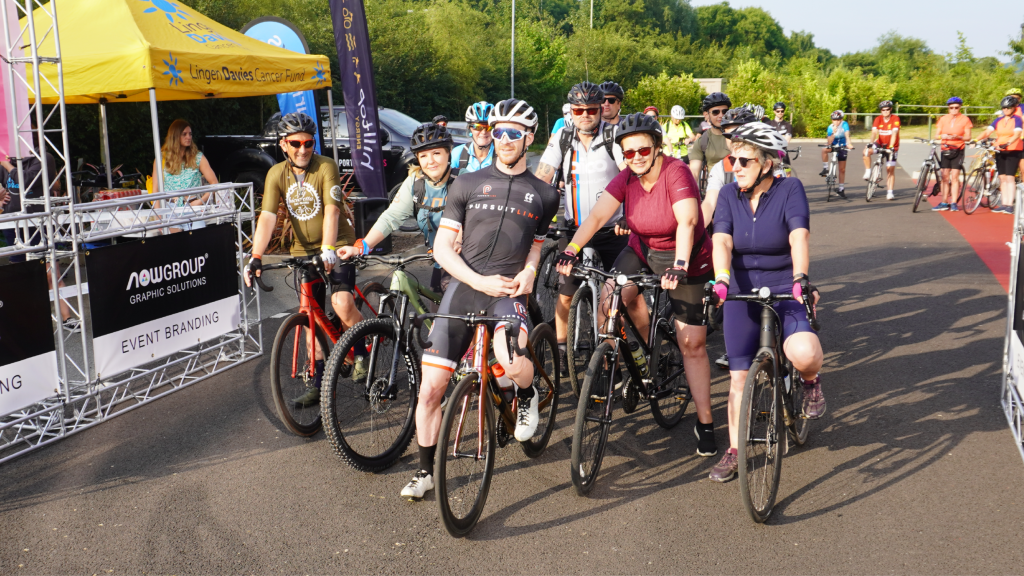 The event brought together people of all levels of fitness, from fearful first-timers to competitive cyclists; it also saw triple Olympic gold medallist and the most successful team pursuit cyclist in history, Ed Clancy OBE, take part amongst Shropshire’s cycling community. He says of the event, “Taking part in the Pedal the Borders cycling event was a great experience for a fantastic cause, fundraising for Lingen Davies Cancer Fund and the essential support they provide for patients across Shropshire and Mid Wales. There was a brilliant atmosphere amongst the Shropshire cycling community and it was a pleasure to meet everyone involved with the event.”

Fourteen colleagues from Aico also participated, as well as others volunteering to assist the cyclists at the beginning and end of the event.

The participants had a choice of routes, all beginning at Aico’s headquarters, including a 50km and 100km circuit. Commencing at the earlier time of 7am to beat the heatwave the UK encountered, all cyclists gathered at the start line, awaiting the challenge ahead.

Throughout the routes, there were plenty of water and snack stations for the cyclists to hydrate and re-fuel, with everyone receiving a participation medal at the end.

Alan Lewis, Founder of Adrenaline Sporting Events spoke of the success of the event, “I was thrilled with how the event went and to have everyone back in good health on a warm day was awesome. The event went well and it’s helped raise thousands of pounds for Lingen Davies. The planning and discussions have already started for 2023.”

The event was raising essential funding for Lingen Davies Cancer Fund, which has been supporting projects to improve cancer services across Shropshire, Telford, and Mid Wales for nearly 40 years.

Helen Knight, Head of Fundraising for Lingen Davies Cancer Fund, gave a huge thank you to everyone for taking part and supporting local cancer services, commenting, “Events like this are about the community coming together to have fun and raising money for deserving causes. Raising awareness about cancer and how to spot the signs and symptoms is a vitally important part of cancer prevention. Our LiveLife Cancer Awareness Service is dedicated to supporting patients, their families, and the wider communities throughout Shropshire and Mid Wales. I would like to say an enormous thank you to our corporate sponsors who helped make this event possible, in particular to Aico for their long-term support, and allowing us to use their state-of-the-art headquarters to host Pedal the Borders.”

Find out more about Aico in the Community: www.aico.co.uk/in-the-community

Aico Abseil in support of The Movement Centre