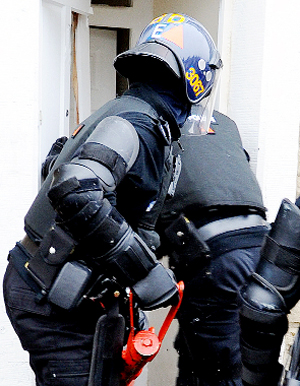 A MASSIVE blow has been dealt to a drugs ring, police claim, after 10 men were arrested in Blackburn and Preston yesterday.

In total across the North West 18 men, aged between 26 and 33, were arrested on suspicion of drug supply offences.

Seven men were arrested in Preston including three 30-year-olds, two aged 27, a 31-year-old and a 26-year-old.

The crackdown on serious and organised crime across the three counties was the climax of eight months of undercover work by officers acting on information given to them by local people.

It began at around 7am yesterday and involved officers from Lancashire’s Serious and Organised Crime Unit.

In addition, 34 officers from Cumbria Constabulary and 20 Merseyside police officers also took part in the raids.

DI Leeson said: “These raids are part of an ongoing investigation into a suspected organised crime group and a drugs supply chain that has seen heroin and cocaine being moved across and sold in Lancashire.

“The activities of serious and organised criminals can have a dramatic effect on our communities.

“It can ruin lives, fuel other crime, such as burglary and robbery, and can install fear in our neighbourhoods.

“We believe that all these people have been working as part of a conspiracy to supply drugs into our local communities.

“We are now looking to secure evidence against these individuals and will be searching further properties in the area connected to these men and where appropriate we will be seizing assets.

“This operation aims to show the public that this type of criminality will not be tolerated.

“The warrants executed will not be the last of this type of activity as we continue to target those individuals who think that they are above the law.

“If we are to do this we need the community to come to us and provide us with information so we can take action against this small number of people who blight the area.”

Further house searches were carried out throughout the day and a large number of assets were also seized to form part of evidence in future Proceeds of Crime Act confiscation hearings.